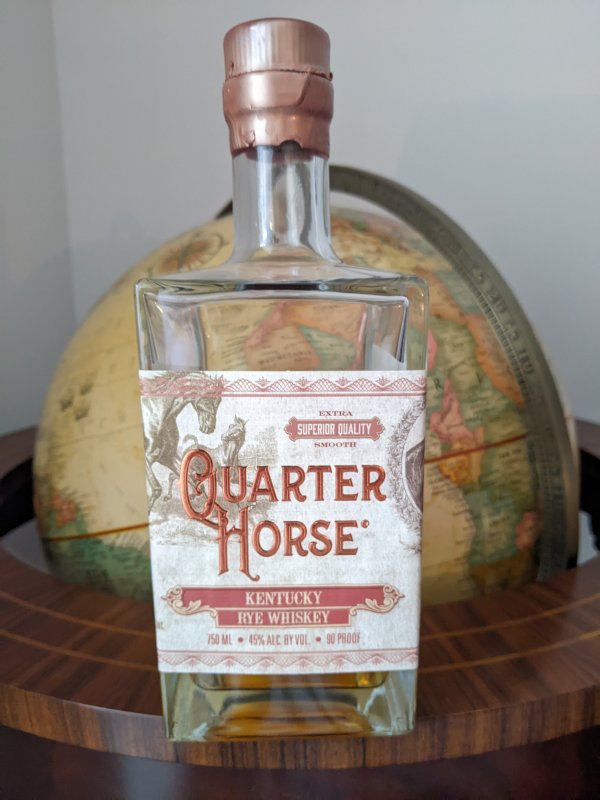 This time around, I’m going to return to my mainstay here on the site and do a whiskey review. In particular, I’ll be looking at Quarter Horse Kentucky Rye Whiskey.

As usual, I’ll start with some notes about this kind of beverage, as well as the producer. With that done, I’ll cover my tasting process in a little bit of detail to get some consistency between these reviews. Once I do that and give you my impression of the drink, I’ll move on and offer some suggestions on how I’d go about drinking it. Without further adieu, let’s get into this excellent whiskey.

Quarter Horse has been making whiskey since the 1800s, and was, according to their company website, the tenth legally registered distillery in Kentucky. Fires, changes in ownership, and the foolish efforts of the Federal government to keep Americans sober aside, these folks have a ton of whiskey-making experience, and it shows.

Rye whiskeys like this tend to have a lot of burn on the front end of their taste, and likely have a little less body than sweeter bourbons that have more corn in the mash. Ryes are often the base spirit for blended whiskies because they give the overall mix the characteristic bite of whiskey.

To taste whiskies, I keep things simple. I pour about a shot’s worth into a short glass, take a hearty sniff, and then sip it slowly while I write these reviews. Now I’m certainly not opposed to a good whiskey bassed cocktail, as I’ll cover in the final section here, I’m also of the mind that the people who have been making it since 1885 probably have done a good enough job that I’ll want to try it by itself. In this case, I was certainly not disappointed by Quarter Horse’s rye offering.

On the nose, I get very little from this rye whiskey, aside from a little burn and, perhaps, a hint of oak. It’s also allergy season here in Florida, but I am trying my best to retain my sense of smell! Tasting wise, this is pleasant if simple, whisky. I get the initial burn I fully expect from a rye whiskey, but also some light smokiness that’s almost reminiscent of some single malt scotches that I quite like. If you’re paying close attention, you may also get some very light sweetness. Overall, this is a clean, quality, and pleasant rye whiskey.

As far as drinking recommendations go, this is one I’ll keep drinking neat. If I’m unwinding after a hot Florida day, then perhaps with an ice cube. If you were in the mood to make cocktails, this would also go superbly as the base for an old-fashioned, especially if you topped it with a dark cherry rather than a sweeter one. This whisky is flexible enough to be used as a base for any whiskey cocktail, but since I like ryes as they are, I will be enjoying this one on its own until it’s time to move on to the next spirit to review.
About author
G
GCurtis
Garrett is a writer and commentator based in the South. His areas of expertise lie in cooking, fashion, and the outdoors among others. He has been writing and educating professionally for years, and enjoys creating online discourses around positively masculine spaces.