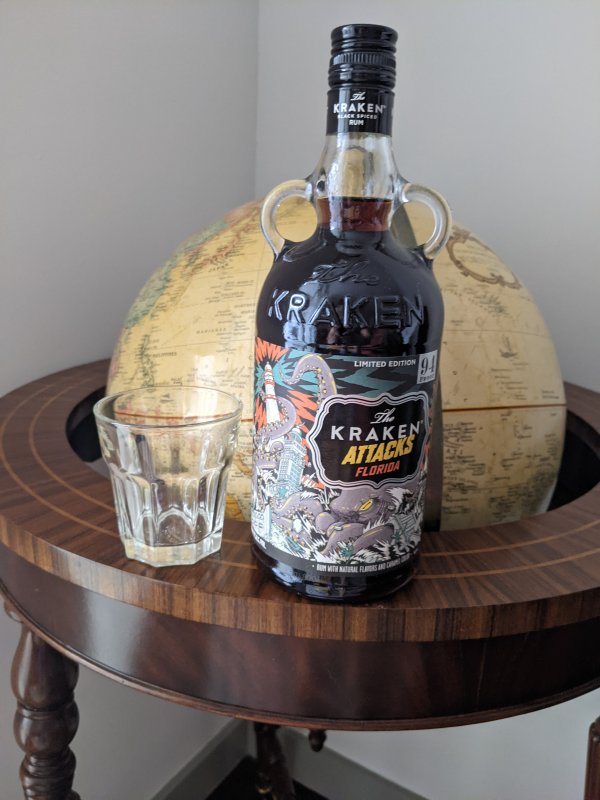 I was supposed to do a tequila review this week. That was the plan until I walked into my local liquor store (try to support small businesses when you can) and was presented with a truly phenomenal deal on Kraken rum, which was being offered one a buy-one, get-one deal. Not being one to turn up my nose at a free bottle of rum, here we are. Tequila will come next week, I promise!

As always, with these, I start off with what knowledge I can find out about the spirit. From there, I walk through my testing procedure and offer both my thoughts on the spirit and its uses in cocktails.

Without further adieu, the Kraken.

Named after a legendary sea beast which, turns out, is the very real and just as terrifying giant Squid, Kraken is a dark rum made in Trinidad and Tago. Since I’m in Florida, that makes it a local spirit, and it’s one of my favorites.

Dark rums are a whole different ball game than light rums. The former are distilled from sugarcane and bottled promptly: dark rums age in barrels like a whisky, and often have flavors added to make them more complex.

For the tasting, I pour a little Kraken in the bottom of a glass, give it a swirl, a smell, and then a sip. I don’t normally drink rum like this, but as with all spirits, I want to taste what came in the bottle, not whatever is lurking around in my water supply.

Kraken is exactly what you’d expect from a mid-tier dark rum. On the nose, I get mostly a pleasant toast aroma, with just a little hint of vanilla. When tasting, the sweetness is more forward: I get a caramel start, which lessens off into the vanilla I had smelled, and it finishes with a not unpleasant burn in the back of the throat. This makes it an excellent dark rum for a variety of purposes.

In terms of drinking it on its own, that’s a little unusual for dark rum. Light rums are a popular shot choice here in Florida, but dark rum shots have enough complexity of flavor to be too heavy for shots duty. Drinking it on the rocks is a lot more doable if you want to enjoy with a cigar.

Instead, I’d drink Kraken as the liquor in a real Cuba Libre. After all, it’s Caribbean spirit. For that, take Coke (yes, the brand Coke, and with real sugar, none of that corn syrup nonsense here), the juice of half a lime, and 2 oz of Kraken. Pour all of it into a glass filled with ice, stir with a bar spoon, and be done with it.

Rum is one of my favorite liquors precisely because it is totally lacking in pretension. It’s a good drink for nights under the clear moons you only get down here over the Caribbean. Now, if you’ll excuse me, I need to go find a lime and start unwinding with the Kraken.
About author
G
GCurtis
Garrett is a writer and commentator based in the South. His areas of expertise lie in cooking, fashion, and the outdoors among others. He has been writing and educating professionally for years, and enjoys creating online discourses around positively masculine spaces.