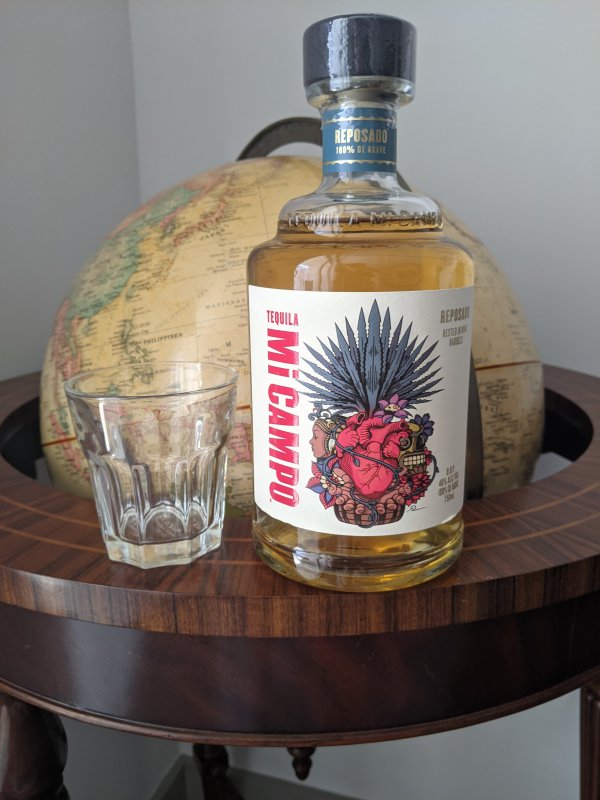 Today, I’m doing something new and reviewing a Tequila. In particular, Tequila Mi Campo’s Reposado. Despite this being a new kind of spirit for these reviews, the format will be essentially the same. I’m excited to branch out this review series: you can read it as a kind of guide to building your at-home-bar

I’ll start the review with a little bit about the brand and the drink, followed by my procedure for tasting to try and be consistent across spirits. From there, I’ll offer my tasting notes, as well as my recommendations for how I’d drink this particular tequila.

Tequila Mi Campo, or, Countryside Tequila for those among us not yet versed in the US’s second most spoken language, is a Resposado Tequila that has been made roughly since 1991 in, yes, Tequila, Mexico. The name refers to the mostly rural surroundings, but this is not an old-timey tequila, known for being harsh and getting you introduced to the local police after one too many shots.

Mi Campo is exactly what I like in a reposado: it’s 100% agave and aged gently, which gives it both light brown color and exceptional smoothness. The Blanco, or white, from the same line, is apparently similarly smooth, but I need to try that one out as well.

For the tasting, I always simply pour the spirit into a glass, give it a sniff, and then taste it. While this isn’t normally how I’d drink, say, rums, it gives me a chance to get to know the spirit on its own terms.

On the nose, this excellent reposado is gentle, to say the least. About all I got in terms of smell was a light, clean, agave flavor that was slightly sweet. Tasting it is a similar story: the flavor is light, with an agave middle and a welcoming burn that almost seems to radiate from your heart a minute later. That doe snake sense, given the modern Mexican label, which is a lot more urban than the Campo label might indicate.

If tequila was the guy at the college party who told you his dad was a lawyer, Mi Campo Reposado is the dad, who is, in fact, a legal scholar whose office smells like mahogany and well-worn leather.

As far as drinks go, this is a tequila that I would, and will, drink on the rocks or neat. It might also be a good candidate for making a tequila old-fashioned or a margarita on the rocks.

Under no circumstances should you mix this with high-fructose corn syrup, fake green margarita mix. Price-wise, this tequila would suggest cheap shooting or mixed drinks, but this is one of those cases where price has precious little to do with quality, and it now occupies a place in my permanent collection in the home bar.

In short, Mi Campo Reposado is a fantastic sipping tequila, and I’d recommend it to anyone who wants to enjoy something truly excellent on a hot, sunny day. It would also go great with carne asada, which, speaking of, is my plan for now.
About author
G
GCurtis
Garrett is a writer and commentator based in the South. His areas of expertise lie in cooking, fashion, and the outdoors among others. He has been writing and educating professionally for years, and enjoys creating online discourses around positively masculine spaces.