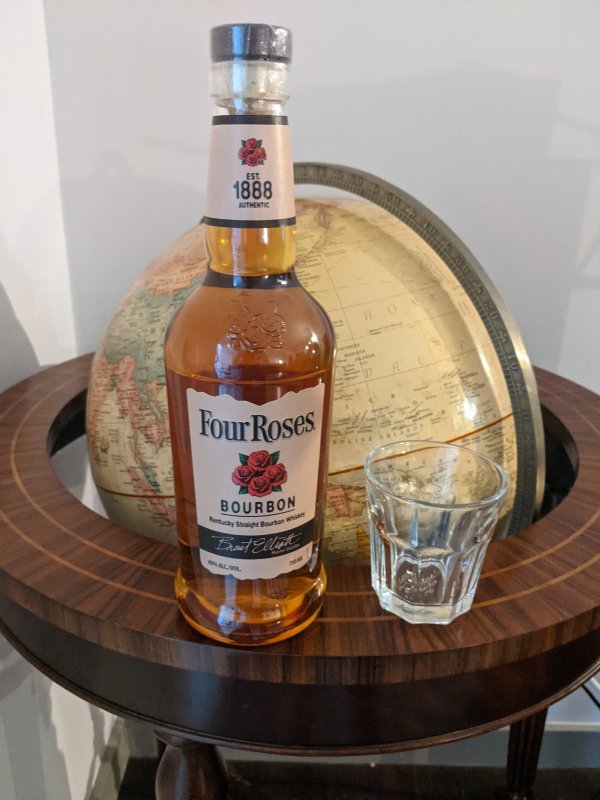 Today, I’m here with the third entry in our whisky review series. This time, I’m looking at Four Roses Bourbon. If you’re following along in the series, you know the drill. For the new people, I start with a brief history of the whisky so we have a better idea of where it’s coming from. Then, I give you my tasting notes on the drink. To round things out, I make some suggestions on how I would choose to drink it, but, as always, remember that the key to whisky, is to drink what you like, how you like it. All I can do is offer my observations. Without further adieu, let’s get to it.

Four Roses is a Kentucky Bourbon whisky that has been in production since at least 1884: apparently, the name is an homage to the founder’s wife, who wore red roses to signal that she wanted to marry him. Though the brand has changed hands several times, it’s still made in Kentucky and is consistently ranked among America’s best-selling bourbons. Like any bourbon, it’s aged in new oak barrels before being bottled and sold to you and me: that’s what gives it its dark color and rich flavor profiles.

When tasting these whiskies, I always do it neat-without ice, first smelling, then drinking the whisky. Four Roses strike me as an exceptionally light whisky on the nose: I got hints of vanilla and not much else. Taste-wise, the vanilla was the main tasting note, and I did get some honey as well. There was a pleasant oak finish that did not last long. To my palette, Four Roses is an accessible whisky that has pleasant flavors that introduce themselves without overstaying their welcome on your tongue and there’s very little burn.

There are a lot of ways to enjoy a whisky like this. I prefer mine neat or on the rocks with just one or two ice cubes. I could also see this drink standing up well to being in an old fashioned and enjoyed slowly with a nice dinner. Where things might get a little muddy is in other, bolder cocktails. If you want to show off other ingredients, then Four Roses will get out of your way: thus, I might use it in an Aperol-forward Negroni, or a Manhattan where I want to make a show of my homemade garnishes.

With that said, if you want cocktails that show off the flavor profile of the whisky itself, then other bourbons with more burn might be the better call. I find Four Roses to be subtle and an excellent sipping whisky.

As the weather heats up and my tastes go for the lighter side of things, I’ll often choose a Four Roses over other bourbons, as the heaviness of other whiskies is a little bit much when the thermometer is in triple digits. This one is part of my hurricane prep kit just in case the power goes out and I’m down to drinks I can enjoy at room temperature.
About author
G
GCurtis
Garrett is a writer and commentator based in the South. His areas of expertise lie in cooking, fashion, and the outdoors among others. He has been writing and educating professionally for years, and enjoys creating online discourses around positively masculine spaces.