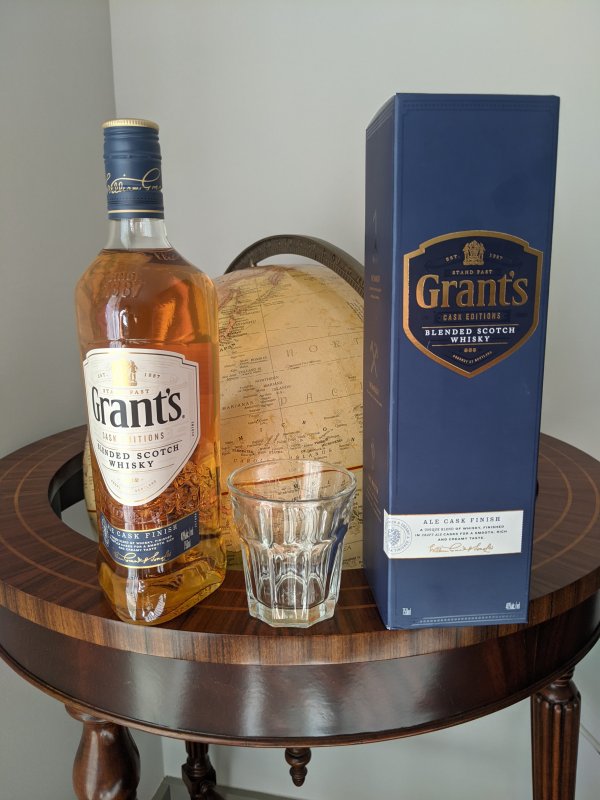 Today, I’m here with our second whisky review, this time looking at Grant's Cask Editions Blended Scotch. Last time, I took a look at Maker’s Mark, an American Bourbon. The world of whisky is a wide one, however, and we’re immediately jumping across the pond to Scotland.

While I don’t plan to stick to any one kind of whisky in these- in fact, I plan to try as many as possible- I do plan on sticking to whiskies that are accessible in terms of both availability and price. My philosophy is that food, travel, gear, and drink reviews do the most good when people can actually try out the thing reviewed, and I hope to help folks make informed decisions or learn something worthwhile.

Grant’s, a Scottish distillery, has been making whisky since 1887, which means the distillery has been family-owned and operated since before the First World War. Having been to Scotland and been fortunate enough to try a lot of their whiskies, they’re proud of what they put into bottles up there, and it shows. Even with these affordable Scotches, you can just about taste the history, pride, and old stone walls in every sip.

This specific whisky is their Cask Editions, which was aged in ale barrels. Scotch, unlike Bourbon, can and is aged in used barrels, which often imparts some of the flavors of the barrel’s previous occupant. Not only is this more economical and environmentally friendly than the American method of tossing perfectly good oak barrels after a single use, it makes for interesting flavors.

As always, I sampled the spirit neat- room temperature, with no ice, in a small glass tumbler. Smelling it, I was greeted with a fine and light vanilla scent and a light sense of warmth on the back of my palette. At least in terms of smell, this is a light whisky that would be accessible to even novice drinkers. That accessibility continued in taste, where I got a little smoke on the front end, a touch of light oakiness, as well as a welcoming, warming sensation on the tongue that did not last terribly long. All in all, this is a whisky that’s not bold or complex as such, but precisely because of that, it is both highly pleasant and would be a great first Scotch to introduce a new person to the type.

In terms of drinks, I think neat is a great place to start with Grant’s Cask Editions. From there, I’d go with Winston Churchill’s old favorite, a Scotch and Soda. Though I can’t condone drinking yours with breakfast, Winston can be excused for being under a great deal of stress at the time.

It would also make an excellent gift: the bottle I found at my local store came in a nice box, and the bottle itself has an overall feel and quality that punch well above its price tag. If you’re looking for a gift for an evening party and you think the host might insist on pouring some drinks from the bottle right away, everyone will win with this pleasant blended Scotch.
About author
G
GCurtis
Garrett is a writer and commentator based in the South. His areas of expertise lie in cooking, fashion, and the outdoors among others. He has been writing and educating professionally for years, and enjoys creating online discourses around positively masculine spaces.