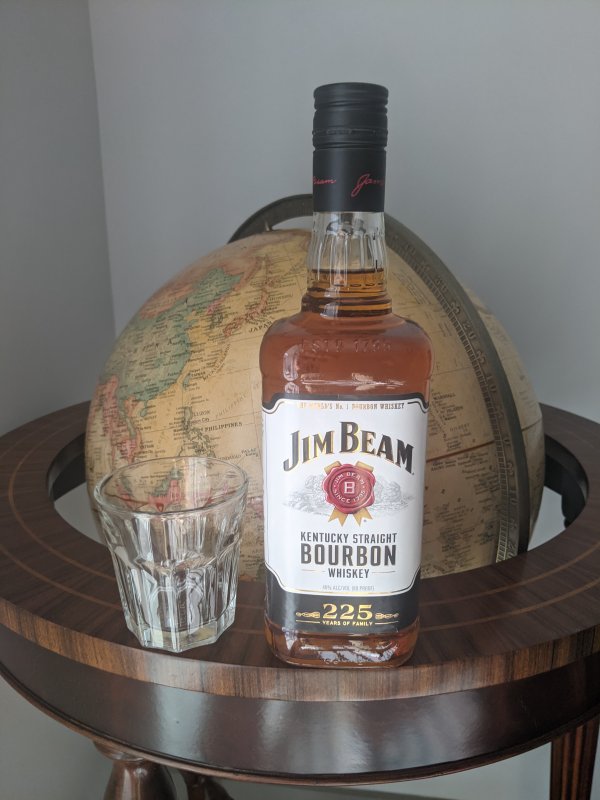 If you go into any liquor store in the country, right now, you will find Jim Beam. It is, in many ways, an introductory whisky. As a bourbon, it has a bold flavor profile and can be a little bit intimidating for some palettes, but the fact that it can be found, affordably, at nearly any place where liquor is sold, makes it one of the classics.

Here, I’ll briefly cover the history of the brand and the product. From there, I’ll offer some of my ideas in terms of tasting notes as well as the kinds of drinks I prefer to be made with Jim Beam.

Jim Beam is an old brand, and they’ve been selling something much like the current Beam since about 1795. That puts it older than most states, and well before even the Civil War. In a word, then, making whisky is at least as American as Apple pie. Speaking of which, Jim Beam makes flavored whiskies, including an apple flavor. While I’m not personally a fan as I tend to drink my bourbons neat or on the rocks, as a cocktail ingredient, I can see the appeal and utility of a flavored bourbon.

As usual in this series of reviews, I tried Jim Beam neat, simply pouring a little into a glass, giving it a little smell, then tasting it for some notes. With this whisky, I didn’t get much smell at all besides a little vanilla and a slightly warm alcohol sensation.

With the tasting notes, it’s much of the same: this is one of the more basic bourbons on the market, after all. The flavor is mostly vanilla, with some slight citrus if you pay attention, and that characteristic burn is front and center here. If you wanted to write a simple description of bourbon in general, this is it.

As far as drinks go, I think Beam is passable when it comes to drinking it neat or on the rocks. It does, however, shine as a mixer because it is so middle of the road. It would make an excellent base for a whisky and coke, and could also stand up well in more complex drinks like a Manhattan. If you’re having a party and you need to make a medium volume of drinks at a value, while still maintaining a good flavor profile, a big bottle of Jim Beam is a good plan.

There’s nothing about Jim Beam that knocks my socks off at this point in my whisky drinking career. With that said, even as someone who has sampled some of the best in the world and developed a reasonably good palette for details, there’s nothing wrong with Jim Beam. It may not be subtle, or exclusive, and that’s fine. In the whisky world, there are good experiences to be had at all price points, and I think that’s the real lesson to be learned here. It’s more about taking the time, having a moment, and enjoying a part of American history that goes back several centuries.
About author
G
GCurtis
Garrett is a writer and commentator based in the South. His areas of expertise lie in cooking, fashion, and the outdoors among others. He has been writing and educating professionally for years, and enjoys creating online discourses around positively masculine spaces.