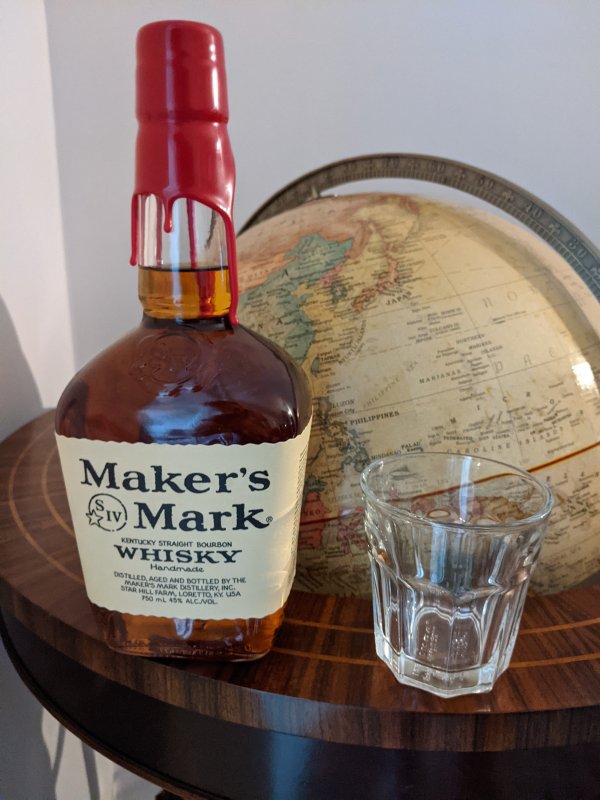 I’m excited for this one: we’re starting what we aim to be a series of whisky reviews. In each of them, I’ll start with a very brief history of the subject of the review. Then, I’ll get right into it and offer you my opinions on the taste of the whisky: this is going to be subjective, but that’s the name of the game when it comes to reviewing whisky. Finally, I’ll offer my thoughts on the best way to enjoy that particular whisky. Without further adieu, let’s get right to it.

Maker’s Mark is a bourbon, which means that the mash, or the raw grain ingredients, are at least 51% corn, and it’s been aged in new oak barrels. There are a lot of other requirements, but this isn’t necessarily the time or place for a dissertation on bourbon laws. Maker’s has been making their flagship product since 1958 in Loretto Kentucky and put it in bottles, topped with a red wax seal in 1958. This is a slightly unusual bourbon, since there’s no rye in it at all, opting for a mix of corn, barley, and wheat instead. That gives it, in theory, a lot of the smoothness that I came to experience in drinking it.

To taste it for this review, I drank Maker’s neat: that is to say, simply poured a little into a glass. After swirling it around to get some on the sides of the glass, I took a good smell. There wasn’t much to the smell, which I like in a bourbon. What I did get was a little bit of honey and just the faintest hint of alcohol. Again, nothing offensive or unusual on the nose, which is a great start.

With the first sip, I got a pleasant vanilla flavor. This makes sense with the sweetness of the honey I smelled. There were also some more subtle hints of oak, which is common in bourbons generally. I got just a little burn that resolved into a slight tingle on the palate. OVerall, Maker’s is an easy-to-drink and relatively affordable bourbon that would be an awesome place to start for beginners. It’s not complex, but it also doesn’t have the burn that turns a lot of folks off from drinking whisky.

For the tasting, I drank it neat. Generally, I’d drink maker’s on the rocks with just a few ice cubes. Since it’s a middle-of-the-road whisky that won’t reach out and slap you with any really aggressive flavors, I’d highly recommend it as a basis for cocktails where you want to show off the other ingredients. For instance, if you had some new bitters you wanted to try out, an old-fashioned with Maker’s Mark would be an awesome way to go.

But, with that in mind, don’t take my thoughts as gospel. Whisky is a really personal thing: drink the whiskies you like, the way you like to drink them. Some people won’t love the relative sweetness of Maker’s, but I think it’s an accessible bourbon that makes for a staple in a home bar.
About author
G
GCurtis
Garrett is a writer and commentator based in the South. His areas of expertise lie in cooking, fashion, and the outdoors among others. He has been writing and educating professionally for years, and enjoys creating online discourses around positively masculine spaces.